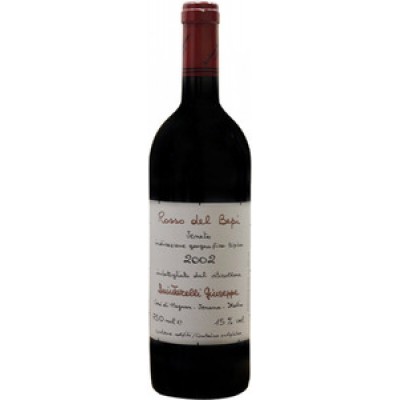 ​The estate of Giuseppe Quintarelli, the Veneto’s most important producer, has received justifiable renown for its near-mythical Amarone, Recioto and the cult wine, Alzero. Although other producers like Romano dal Forno, who was Giuseppe Quintarelli’s protégée, make fine Amarones, Quintarelli Amarone is inarguably the benchmark for the wine. The namesake and the touchstone for the estate, Giuseppe or “Beppe” Quintarelli established the standard for other Veneto reds, including Recioto and Valpolicella Superiore. Giuseppe Quintarelli died in January 2012 at the age of 84; his estate continues on in the hands of his wife and children, who learned winemaking from the man known as “The Master of the Veneto.” A perfectionist who practiced rigorous grape selection, Quintarelli released his wines to market only when he deemed them ready— often many years after his fellow Veneto producers.

The 2002 Rosso del Bepi flows with tons of elegance in its dark red fruit, cocoa, spices, sage, and crushed flowers. This is a beautifully rich, concentrated red with gorgeous length, finessed tannins and superb overall balance. Rosso del Bepi is the label Quintarelli uses for wines that don’t meet his exacting standards for Amarone. While the 2002 Rosso del Bepi doesn’t quite have the requisite richness to be an Amarone, it is a totally compelling, harmonious wine all the same. It is a superb bottle for the dinner table, where its mineral-infused brightness will pair well with food...- The Wine Advocate (2002 vintage)
The Wine Advocate: 93/100 (2002 vintage)